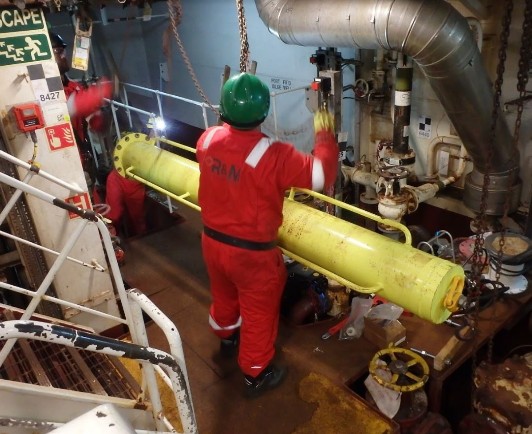 EM&I once again lead with a World’s First.

A completely diverless system for protecting underwater hulls from corrosion was installed and is operating successfully on an FPSO in the UK North Sea.

The innovation means companies operating offshore around the world can be safer and reduce costs by deploying the HullGuard® system.

HullGuard eliminates the need for divers to install and maintain ICCP and can be retrofitted or installed as original equipment without the POB and operational restrictions of other conventional systems.

HullGuard is installed with a 3-4 man team which results in reduced carbon emissions associated with transporting 15 man dive spreads and associated support vessels or systems.

Designed for lifetime protection of the underwater hull from corrosion below the water line, HullGuard is an EM&I innovation that involves locating a tubular anode with an integral dielectric shield, through an ODIN® type port fitted to the ship’s hull.

Once the anode is installed the launch tube is removed leaving only the completion plug in place with the electrical supply cable ready for connection to a standard transformer rectifier.

HullGuard can be installed and maintained at any stage in the asset’s life, either from new or retrofitted.

Danny Constantinis, EM&I’s executive chairman, said: “EM&I’s mission is to reduce risk, cost and carbon emissions in the Energy Industry. Diving and working at height are areas where we have already made great inroads in this direction and HullGuard is one important step in this direction.

The future is using robotics, digitisation and technology to drive this transformation and I am confident that this solution will be welcomed in a market which seeks safer, lower cost and lower carbon footprint solutions.”

The Evolving World of Inspection Technology

Getting Wind of Robots

EM&I has had its first floating wind article published in Energy Global, a leading publication for the renewable energy industry covering wind, solar, bioenergy and storage. The article describes how EM&I’s unique service offering coupled with its extensive experience in oil and gas make it ready to develop in the floating wind sector. Click here […]